Novel technologies and markets share very similar patterns: a hype cycle, followed by a steep decline as realistic barriers and obstacles become more apparent, ultimately followed by substantial growth as those barriers are overcome. The speed at which these new technologies and markets catch on is based on an amalgamation of near infinite factors, with the fastest growing opportunities often the ones with the most objective, understandable value in usage outweighing and outpacing those barriers.

In the years I’ve been covering augmented reality, this has proven continually true; proven value is so easily and so often paired with aggressive forecasts and exciting ROI metrics, for good reason.

Augmented reality can mean many things to many people; for myself and ABI Research, augmented reality is a top-level market segment, and extends beyond a specific device type. Within augmented reality, we are discussing any device and application that allows for see-through data visualization, whether head worn with smart glasses or handheld through a smartphone or tablet.

ABI Research estimates the total augmented reality market to reach over $100 billion by 2024, at an average CAGR of 75%.  The mainstay early adoption verticals like Manufacturing, Logistics, and Energy are still showing impressive growth, while newer verticals like healthcare, media & entertainment, and retail/commerce/marketing are the fastest growing.

Total smart glasses shipments aren’t quite as aggressive, but we’re still expecting over 20 million devices to ship in 2024, not counting a sizeable AR-enabled mobile device base as well.

I spoke with Librestream who shared statistics on the use of their augmented reality enterprise platform that backs up the growing maturity of this market. They’ve seen a 262% CAGR in growth of usage across their global customer base over the past 3 years. Of that usage, wearables have a 587% growth rate. While this growth in wearables appears dramatic, it represents less than 10% of the total usage as smartphones and tablets still dominate the use of AR software. They expect this to change as enterprise wearables continue to mature.

A significant number of companies are digitizing their operations by modernizing and streamlining where they can. As part of that discussion—which often looks to IoT and analytics as a cornerstone—augmented reality is a fast-growing component.

As a result, AR will latch on to that momentum and hit the ground running alongside broader and more mature digitization efforts. To give some context to this, ABI estimates that total IoT services revenue reached $110 billion in 2018; by 2026, data and analytics services could make up nearly 30% of this revenue.

For the day to day, there is pressure to capture knowledge as quickly as possible to leverage for training and service. In North America, there are thousands of retirements every day; these are often experts in their fields and may take their decades of knowledge with them when they leave. This leaves a significant gap not only in knowledge, but also in actual output, leading to very real dollar loss.

Consulting firm Korn Ferry produced a study supporting this recently; by 2030, there could be a human talent shortage of 85 million people, which means jobs are open without people to fill them. According to the study, this could leave $8.5 trillion in unrealized annual revenue globally.  If AR can take even a small percentage of that shortage and fill those positions—through knowledge transfer, training, and a more modern technology-centric workflow, that’s a massive boon for the market and for all involved.

Top 3 Use Cases for AR

Augmented reality training can encompass a few different use cases that may be categorized separately, but when AR is used specifically to train a worker for a task/workflow/situation, it is highly effective. Humans are visual learners, and so any visuals that can be integrated into a learning regimen will be well received and effective. Combining that visual element with an interactive, hands-on one—which Augmented Reality can do—creates and incredible level of engagement, retention, and recall in users.

When compared to the standard training methods used today, with physical documents and videos most common, AR training has an objective advantage. In my discussions with Librestream, over 30% faster training of new techs was cited.

Remote expertise is perhaps the most mature use case discussed today, and one of the easiest to deploy with low AR technology requirements (of course easiest is relative). As a result, it is also one of the highest value use cases with quickly realized and easily accessed ROI. At its core, AR remote expertise needs a 1-way video feed from the user to an expert, and a 2-way audio feed between both.

This naturally fits with head worn AR use cases thanks to the ubiquitous cameras and sensors onboard, but it also fits nicely with mobile device AR thanks again to ubiquitous cameras combined with visualization opportunities. Additional value can be harnessed through aspects like navigation, annotation, 3D model/object recognition, workflow overlay, and more. ABI estimates nearly 2 million monthly active users in the manufacturing space to utilize AR remote expertise in 2024.

Today, very little data is collected and utilized regarding human workers and their workflow. There’s plenty of M2M and IoT data out there, but it usually sits at least one layer of abstraction away from a user. This creates an inherent barrier in content creation, which is a common stumbling point in a nascent market.

With the capabilities of AR devices both head worn and handheld, not only can more data be collected, it can be collected seamlessly along with an AR use case (such as training or remote expertise) and present entirely new data types for analysis and use. Visual data has always been a difficult data type to ingest and analyze, but now there are dedicated sensors in AR hardware that can synergize with other data types: location, environmental sensors, and more can be weaved together through AR.

Librestream calls this the Human IoT element; while we don’t use the exact same terminology at ABI, we do describe the experience similarly. IoT has been device-to-device focused for so long, and those devices always sat outside or tangential to human users; AR is the first real chance to directly connect humans to this already massive IoT ecosystem.

Librestream described the evolution of business outcomes they’ve witnessed across their customer base over the past few years. The initial focus was on cost avoidance and productivity gains, which is now evolving to include revenue uplift through new service offers and an increased focus on worker safety. For example, they have customers who track worker safety metrics that range from mileage saved for field inspectors to lower exposure hours in potentially dangerous environments.

Productivity and cost avoidance are still very important though with customers tracking a range of metrics from accelerated time to productivity for new techs (33% for one equipment manufacturer) to equipment uptime improvements (5-10% measured by a rig operator) and direct savings from reducing aircraft on ground time – in the range of $800,000/incident.

Some preliminary ABI Research analysis from my team and I also estimate a possible increase of 30% in operational equipment efficiency, thanks to a combination of fewer required workers, accelerated worker training, and higher per-hour worker productivity through augmented reality.  There can also be a direct machine and user downtime reduction with several the most prominent use cases.

AR Part of the Digital Ecosystem

Other synergistic technologies including 5G, AI/ML, Robotics, IoT, and Blockchain are all commonplace in discussions around digitization, in which AR is an increasingly growing portion of that conversation.

Edge compute and edge streaming can offload resources from a local device to the cloud, lowering user-touching hardware requirements. AI and ML are already being utilized in big data analytics, where AR can also feed into, but on top of that components of an AR experience like SLAM tracking and object recognition can be continually improved with proper AI/ML implementations.  Robotics meshes nicely with IoT and AR. And with the massive amounts of data flowing in this potential forward-looking system, blockchain to keep it secure and ensure proper delivery can be pivotal.

All in all, AR has both objective value as a standalone technology, and improves dramatically when combined with other powerful technologies. The most value available today also happens to lie where it is most easily recognized; remote expertise, training, and data logging all have direct beneficial ties to AR both handheld and head worn.

These components are all coming together create a potential revolution in the workplace and beyond, with a true realization of a situation where the whole is greater than the sum of its parts. 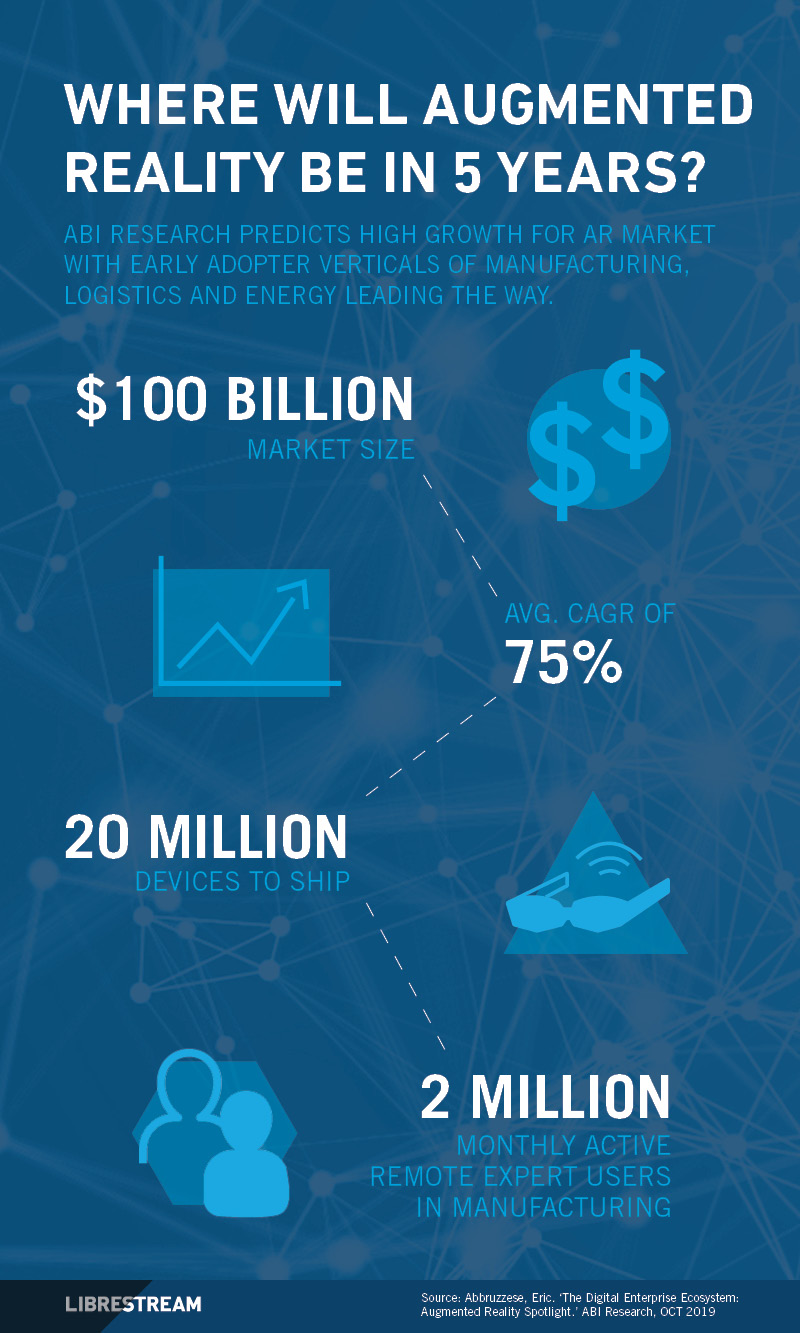